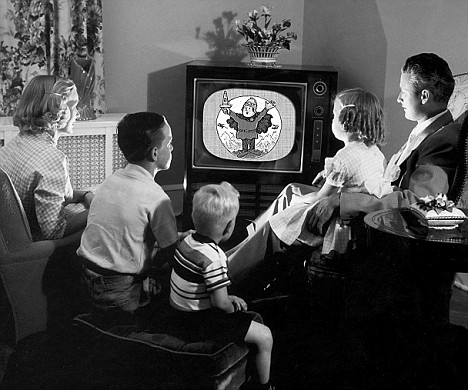 The Sagas of Noggin the Nog were first shown on British television in 1959. It was made by Peter Firmin and Oliver Postgate. They also made Pogle’s Wood, Ivor the Engine, Bagpuss, the Clangers and loads of others: the stuff that many childhoods were made of. The films were made in less frenetic times. The stories were beautifully crafted and the characters carefully drawn … but the films were also quite, quite mad! Vikings who appear to come from Surbiton, who are constantly stopping for tea and toast, who will go on any adventure at the drop of a hat. And what adventures! Travelling to the other ends of the earth to meet a possible bride. Travelling to the Hot Water Valley to do battle with an Ice Dragon that is ruining the farmer’s crops. There was a Goon-ish silliness about the tales. It was these qualities that attracted us to the Sagas and made us want to create a piece of theatre that would do justice to the marvellous nonsense of Firmin and Postgate.

Queen Grunhilde the Lazy One and her maid, Ignora!

The stories feel utterly modern though laced with the sensibilities of gentler times. When we came to make the play we referenced the Goons, Monty Python and cartoons that adorned our telly screens … Tom and Jerry, Road Runner and even Scooby Doo and Danger Mouse. The resulting piece of theatre is Pythonesque in its clever silliness, Goon-ish in its character driven narrative, cartoonish in its “feel” and Firmin and Postgate-ish in its attitudes.

“The Nogs are a charmingly mild-mannered bunch of Vikings. They sound a bit like Terry Jones, they look a bit like him too. Except for Noggin. Noggin the Nog, their young leader, is handsome in a Viking sort of way. From my seat in the audience I was almost picked to marry him. But Noggin decided on the Princess of the Nooks instead. They bonded over cocoa and hot buttered toast.
Buttered toast is very important to the Nogs. There’s no threat so desperate, be it storm-lashed seas or marauding dragons, that they can’t stop to make toast round the sine qua non of Viking icoNOGraphy: a glowing camp fire.
The first ever stage production of Peter Firmin and Oliver Postgate’s much loved television series retains the homespun, low-tech aesthetic of the original without looking in any way amateurish.
While much of the low-key humour derives from the sort of knowledge of the series which belongs to the older members of the audience, there’s still plenty of fun for the younger ones. It’s a close call as to who enjoys it more, the children or their grandparents.
An expertly acted, beautifully realised stage play with the warm charm of a bedtime story.”

Amanda Kriek’s ★★★★ review for The Independent

I have reprinted this because it sort of bears out what I was getting at. 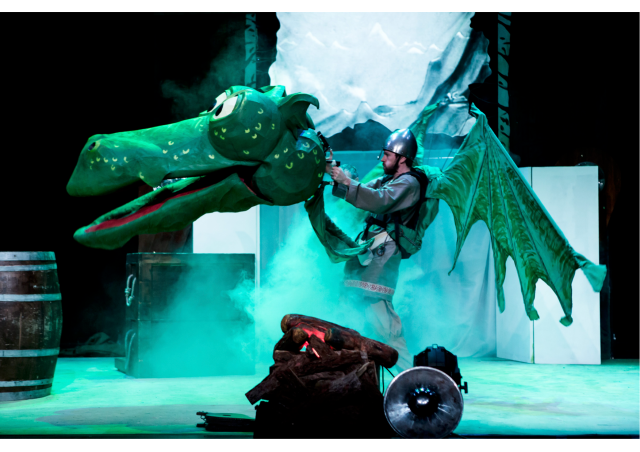 The Sagas of Noggin the Nog play is a fairly gentle madcap dash with live music, created on an old and charming harmonium, high-tech projection of Peter Firmin’s original drawings, beautiful puppets both small and, in the case of the dragon, blooming big, some clever theatrical tricks and a cast of Vikings that always appear to get through to the end of the play despite much giddy recklessness and a terribly English absurdity en route.

Nostalgia is often levelled at the play and, of course, the play is based on a 1959 stop motion film, so there is a nostalgic feel to the piece but it is also very much a modern play. It does the play a dis-service to think of it as purely nostalgic. The play is truly cross-generational (I hate that phrase, it sort of puts the play into a pigeon hole that is so big you could get a Giant Bustard in it) … it has been performed to people from babes in arms to much more elderly people (87 years old I seem to remember in one audience). And is enjoyed by all … everyone says that, I know but it really is true of Noggin the Nog. The play is sort of “panto-esque” (not my phrase) but only in the sense that it has a baddy, a few songs, is funny and has a sort of Dame in Queen Grunhilde … but it differs in that it does not have one section for children, dirty smutty innuendos for adults and an inapposite modern pop song for the fairy tale character to “get down” to … the stories and the way we portray them are genuinely accessible and can be understood and often laughed at by all.

Follow this link to find out where and when.