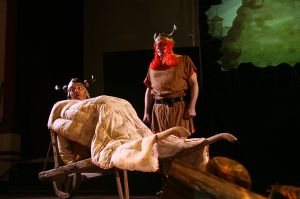 I thought I’d start with a picture of Queen Grunhilde the Lazy One and her trusty maid, Ignora, for no other reason than I quite like it … as indeed do lots of Edinburgh people now. We had a lovely performance today (Monday 4th August) with almost a full-house. The flyering is paying off perhaps. But … I’m rushing into things … I haven’t told you about Saturday yet … the trouble is there is so much happening up here, so many things going on all around us … I can’t remember a thing about Saturday. Oh, I went to see a show at Assembly Roxy … but I didn’t enjoy it so I won’t mention which one it was. It also rained on Saturday … and Sunday … and, indeed, today … but at least today the rain is quite warm … though it was lashed into our faces by a fairly strong wind. The sun has come out now and George Square Gardens are delightful in the sun. 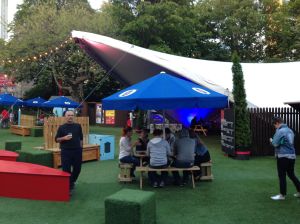 This is actually a photo of the gardens and the bar in slightly less than clement weather but imagine it with the sun shining and you’ll see what I mean. There are loads of people around enjoying the buzz. Unfortunately I am hobbling around with a slightly gammy ankle … just the general wear and tear of age sadly. So I’ve wandered into the Assembly Cafe, put my foot up and looking helpless towards people who I hope will wander over and see if I want a cup of tea … I won’t hold my breath.

Sunday Night I went to see Gavin Robertson doing his “Bond” show … which I can thoroughly recommend; clever, witty, technically brilliant and … a charming evening was had by all … do go and see it if you get the chance.

During the day yesterday I spent hours walking around Edinburgh handing out flyers … hundreds of them … and dodging the rain. Lorks a mussy it rained … spent lots of time under awnings with rain dripping down my neck and then leaping out in front of unsuspecting families and shoving a bit of papier-mâché into their hands. All were charming … except for the ones who weren’t! I bumped into Stewart Lee (Stewart Lee’s Comedy Vehicle) with his family and tried to give him a flier (before I realised it was him) and he said “Oh, we saw that on Thursday, we really enjoyed it” … I chatted to the children who both decided that their favourite bit was the Dragon … so … 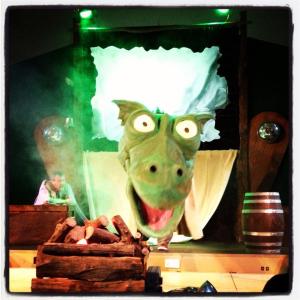 … here he is … for those of you who haven’t seen the show yet … what are you waiting for.

I am now going to hobble over to the counter and buy myself a coffee as no-one else has offered.

Look out for Edinburgh Diary Number 3 … later in the week.