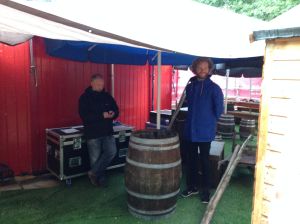 There is a bit of a theme here as you can see … the theme is moisture … quite cold moisture coming from the sky! And quite a lot of it!

Yesterday (Sunday 10th August) there was a huge amount of it; it seeped down necks, into shoes and up careless sleeves. Just as we were about to do our get-in for todays show, which we have to do in about fifteen minutes, the heavens opened, the sky cracked and the thunder thundered. Loudly! We splashed through water with barrels and boxes, puppets and props. We paddled across the stage and slipped and skidded like swans on an ice covered lake as we tried to lift the main part of our set. There was a waterfall coming through the centre of the roof … just where we put one of our two projectors. A message was sent and received and within two minutes two of the Assembly team turned up with a ladder (we had the same problem a few days ago which I think I’ mentioned in the Edinburgh Diary a while ago). One of the team shinned up a ridiculously tall ladder and armed with bits of material and gaffer tape, staunched the flow. The space was mopped, the projectors set and turned on and in came the audience.

It is a funny thing when there is a bit of a panic: a Dunkirk spirit seems to enter all involved. The first two minutes of the performance were quite difficult because of the unbelievable noise coming from the roof of the tent. The tent has wooden sides, a wooden floor and a canvas roof with a little dome on the top which acts as a vent to let hot air escape … it also, apparently, lets in wind blown water. The canvas roof performs a little like a drum … with us and the audience sitting inside it. So the first few minutes of the play sounded as though three hundred Ginger Bakers were belting away at a snare-drum. We talked very loudly and added a few little jokes in about the noise, water, etc. The audience, which was a remarkably large audience for such a miserable day, hunkered down in their seats and decided to go with us and enjoy whatever happened next. 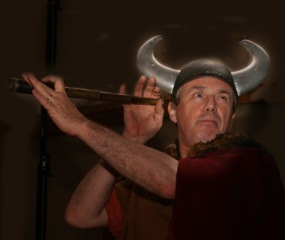 Nogbad the Bad looks for where the next wave of rain will come from!

Monday … we had a day off. The first for a few weeks. I had intended to do all sorts of things … I did nothing but read a book, watch a black and white film or two, doze and eat. I was a tired bunny and the weather wasn’t that conducive to going out and having fun. It was the first time in weeks that I’ve managed to have a really lazy day. I did, after a couple of small glasses of beer at The Caley Sample Room, start to think about theatre, other projects, re-inventing one’s self, searching for new audiences, finding new ways of doing things, and on and on … this is, I think, one of the exciting things about coming to the Edinburgh Fringe. There are so many people up here doing great things that it makes you want to create new work, and little conversations here and odd visual stimuli there begin to get your creative juices flowing and, more importantly, make you question your own methods and ways of working. All kinds of new thoughts came rushing in … these are still going round and round my head today.

Tuesday 12th August … funnily it rained again today … and the wind blew but still we had a lovely and quite big audience, which for a wet Tuesday was very pleasing. Tony and I then went to a discussion about touring theatre for young people internationally at the Summerhall venue. It was interesting though I’m not sure I learned a great deal that was new … but it was great to meet other practitioners and talk about each others work over a glass or two. So thank you to all at Imaginate and the others on the discussion panel.

Tomorrow is another day … and another wet day I suspect, though it has been promised that the rain will be warmer tomorrow!