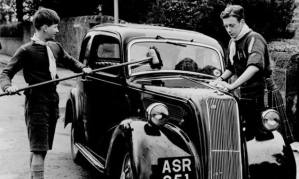 Ah, do you remember this. Scouts, Guides, Cubs and the like knocking on your door and asking if you had any jobs that you would be willing to let a ham-fisted youth do for a bob (1 Shilling or 5p in todays money). I was a fairly unenthusiastic bobber-jobber but I cleaned cars, washed windows, dug gardens, mowed lawns and all for a bob for charity! It was enjoyable in a sort of “do I have to this” kind of way.

Well, The Sagas of Noggin the Nog, is off to the Edinburgh Festival. We are trying to raise money to enable Noggin to perform in front of new audiences, venue bookers, producers, theatre professionals and so on, at the biggest festival for performance in the world, as a means to achieve more with this “entrancing” family show next year; we want Noggin to be seen by many more people. So … and this is where our campaign differs from Bob a Job week … we are having a Bob-A-Nog week … where we ask you for money and in return (instead of us coming round and cleaning your lawn or mowing your car) we give you a warm feeling inside … and (oh, yes, there’s more) there are certain rewards that can be claimed … all you have to do is click on the link below which will take you through the ether to a new place. This new place is called Kickstarter … its a bit like Narnia only much more commercial and yet strangely heart warming … in this land of Kickstarter there is a campaign … and in this campaign there is a place where you can pledge anything from £1 to … the sky is always the limit in Kickstarter Land … for The Sagas of Noggin the Nog and … you can see what wonderful rewards there are.

Oliver Postgate and Peter Firmin created Noggin the Nog back in 1959. I remember sitting and watching it on British television when I was nought but a mewling and milk puking sprog … it was in Black and White and was somewhat eerie … the music, the visuals and Oliver Postgate’s clipped accent making it feel somewhat other-worldly. Looking at it now it still has that strange, eccentric Englishness about it that intrigues and welcomes you in … it is gentle, humorous and quite different to todays wham-bam TV; the story-telling is compelling and simple but you want to know what is going to happen next. It was quite brave children’s television … the King, who you imagine might be one of the main characters, dies in the first few moments of the first episode and we are then introduced to Noggin, the King’s son … it is his tale we are about to follow. In order to be king, Noggin has to marry within six weeks, or the crown will go to his wicked Uncle, Nogbad the Bad. The stage (screen) is set for the tale to unfold. I won’t tell you what happens as that will spoil the story, though … in the second series, King Noggin, oops! … travels to the Hot Water Valley to help the little people who live there with a Dragon problem.

It is the first two series of Noggin the Nog that our play centres on. There are silly Vikings, live music, puppets and live projection taken from the original films. It is a family show. Children love it and adults love it, together they love it even more … last week we performed at Theatre Royal Margate. In the afternoon we had a large audience of school children who shouted quite loudly at Nogbad the Bad, in the evening we had more of a family audience … who booed and shouted very nicely at Nogbad the Bad and cheered when Noggin was successful. Both shows seemed to be enjoyed by all … perfect. 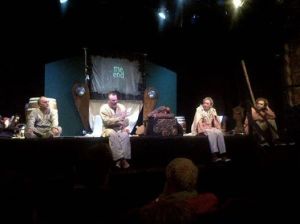 This is us chatting to the audience after the show at Theatre Royal Margate!

Anyway … if you are still here … why? Why aren’t you clicking on the link!

Thanks for getting this far.

I will attempt to update the blog regularly over the next five or six weeks … almost like an Edinburgh Festival Diary. We’ll see how I get on!